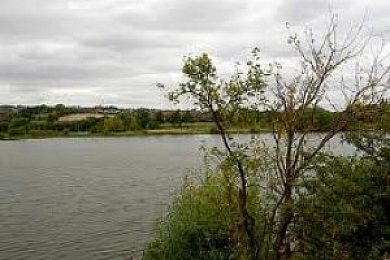 Elescar Reservoir is one of a number of big reservoirs that are situated throughout the South Yorkshire area. The water is actually controlled by the Elescar Colliery Society, who will provide day tickets on the bankside. The size of the water does not help in fish location and a chat to locals is the best bet if you've not fished there before.
As with most reservoirs the facilities are nonexistent, but there is plenty of banks side cover.
Although very few and very hard to target, there are carp in this water, which go over the 20lb. mark, but only in general, fall to the dedicated angler using specimen tactics. Surprisingly, for water of this size there are also a good head of tench up to 5lbs.
Roach average 4 oz, but the best fish go up to the 1lb mark. Plenty of perch, which will take the bait at most times of the year. Together with large shoals of skimmers and also some very good sized bream up to 8 lb.
The water has permanent pegs marked out on the banks, which does aid in putting in you in the right spots. The busiest areas tended to be down the roadside. Anglers use ground bait feeder at long range to target the skimmer bream.
Preferred tactics for pike anglers are roving tactics with big lures in an attempt to catch some of the residents, which are in excess of 20lb. Dead baiting with sea baits was also very effective in calmer conditions.

We have 257 fisheries listed within Yorkshire.