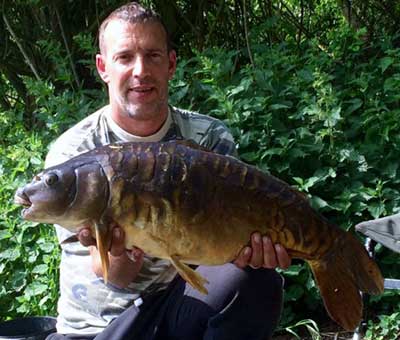 Originally dug as a clay pit, The Airman was purchased by SDAA in 1965 and has slowly matured into an excellent stillwater venue catering for both specimen and pleasure anglers. The lake is around 4 acres in size and with depths to 30 feet in places (see below for depth map).The fish respond to a range of fishing styles and are often found patrolling the shallower reed lined margins. The reed beds are also a haven for a wide range of birds and insects with the lake designated as a County Wildlife Site.

The Airman is licensed to hold Wels catfish with the original stocks being direct descendants of the catfish originally introduced into the UK in 1880 by the Duke of Bedford. The catfish have thrived and specimens to over 60lb are now present, making it a very special club ticket water. Thereis a good head of stunning carp to 30lb and the club regularly stocks the lake with small numbers of quality carp to ensure the long term future of the carp fishing (see below for details).

When the catfish are dormant during the winter months the pike maintain the predator anglers’ interest with fish to over 20lb reported most seasons, with specimens to over 30lb being landed in the past. Pleasure anglers can also enjoy some excellent sport from the smaller species. Track down the roach shoals and bags well over 20lb are always on the cards, with nets often including several fish over 1lb. Specimen roach to over 3lb have been caught in the past with the biggest roach (2lb+) often accidental captures by carp anglers.

The lake holds a good head of bream from ‘skimmers’ through to specimens well into double figures. There has been a notable increase in the numbers and size of tench caught in recent seasons, with anglers now able to catch several fish in a session with tench to double figures. Shoals of specimen rudd are often seen patrolling the surface in warmer months and present a special challenge to anglers. Perch have always been present in good numbers but larger specimens to 3lb have started to show in recent years.